TL;DR: Nobody took our BTC. Random people from the Internet even donated into our BTC wallet. We showed the feasibility of a transparent self-service bounty. In the style of Dijkstra: security bounties can be a very effective way to show the presence of vulnerabilities, but they are hopelessly inadequate for showing their absence.

What are you talking about?

Earlier this year, we released a Bitcoin Piñata. The Piñata was a security bounty containing 10 BTC and it's been online since 10th February 2015. Upon successful mutual authentication, where the Piñata has only a single trust anchor, it sends the private key to the Bitcoin address.

It is open source, and exposes both the client and server side of ocaml-tls, running as an 8.2MB MirageOS unikernel. You can see the code manifest to find out which libraries are involved. We put this online and invited people to attack it.

Any approach was permitted in attacking the Piñata: the host system, the MirageOS TCP/IP stack, our TLS, X.509 and ASN.1 implementations, as well as the Piñata code. A successful attacker could do whatever they want with the BTC, no questions asked (though we would notice the transaction).

The exposed server could even be short-circuited to the exposed client: you could proxy a TLS connection in which the (encrypted!) secret was transmitted via your machine.

This post summarises what we've seen so far and what we've learned about attempts people have made to take the BTC. 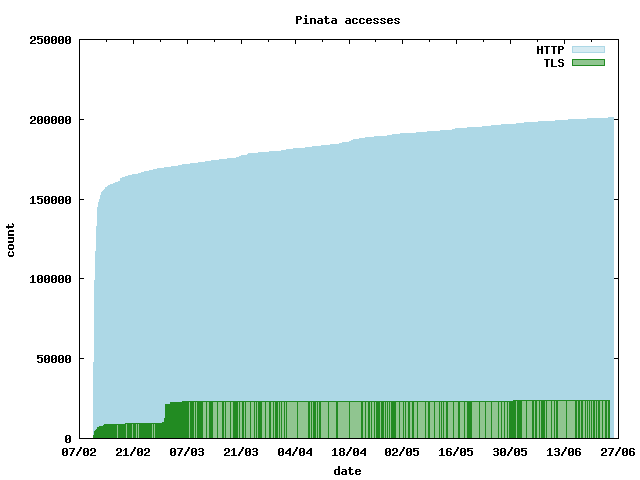 There were more than 9000 failing and 12000 successful TLS sessions, comprised of short-circuits described earlier, and our own tests.

We are not talking to everybody

Our implementation first parses the record version of a client hello, and if it fails, an unknown record version is reported. This happened in 10% of all TLS connections (including the 1000 with invalid input in the last section).

Another big class, 6%, were attempted Heartbeat packets (popular due to Heartbleed), which we do not implement.

Recently, issues in the state machines of TLS implementations were published in smacktls (and CCS injection). 3% of the Piñata connections received an unexpected handshake record at some point, which the Piñata handled correctly by shutting down the connection.

In 2009, the renegotiation attack on the TLS protocol was published, which allowed a person in the middle to inject prefix bytes, because a renegotiated handshake was not authenticated with data from the previous handshake. OCaml-TLS closes a connection if the renegotiation extension is not present, which happened in 2% of the connections. Another 2% did not propose a ciphersuite supported by OCaml-TLS; yet another 2% tried to talk SSL version 3 with us, which we do not implement (for good reasons, such as POODLE).

In various other (old versions of) TLS implementations, these connections would have been successful and insecure!

Interesting failures were: 31 connections which sent too many or too few bytes, leading to parse errors.

TLS requires each communication partner who authenticates themselves to present a certificate. To prove ownership of the private key of the certificate, a hash of the concatenated handshake records needs to be signed and transmitted over the wire. 22 of our TLS traces had invalid signatures. Not verifying such signatures was the problem of Apple's famous goto fail.

Another 100 failure traces tested our X.509 validation: The majority of these failures (58) sent us certificates which were not signed by our trust anchor, such as CN=hacker/emailAddress=hacker@hacker and CN=Google Internal SNAX Authority and various Apple and Google IDs -- we're still trying to figure out what SNAX is, Systems Network Architecture maybe?

Some certificates were not of X.509 version 3, or were expired. Several certificate chains were not pairwise signed, a common attack vector.

Another two connections (both initiated by ourselves) threw an exception which lead to shutdown of the connection: there was an out-of-bounds access while parsing handshake records. This did not lead to arbitrary code execution.

The BTC Piñata was the first transparent self-service bounty, and it was a success: people showed interest in the topic; some even donated BTC; we enjoyed setting it up and running it; we fixed a non-critical out of bounds access in our implementation; a large fraction of our stack has been covered by the recorded traces.

There are several applications using OCaml-TLS, using MirageOS as well as Unix:

Again, a big thank you to IPredator for hosting our BTC Piñata and lending us the BTC!