Using Irmin to add fault-tolerance to the Xenstore database

Xenstore is a critical service found on all hosts running Xen. Xenstore is necessary to

Xenstore must be reliable: if it fails then the host is unmanageable and must be rebooted.

Xenstore must be secure: if it is compromised by a VM then that VM can access data belonging to other VMs.

The current version of Xenstore is already written in OCaml and documented in the paper OXenstored: an efficient hierarchical and transactional database using functional programming with reference cell comparisons presented at ICFP 2009. The existing code works very reliably, but there is always room for improvement for debuggability of such a complex system component. This is where Irmin, the storage layer of Mirage 2.0, can help.

But first, a quick Xenstore primer:

Xen and Xenstore in 30 seconds

The Xen hypervisor focuses on isolating VMs from each-other; the hypervisor provides a virtual CPU scheduler and a memory allocator but does not perform I/O on behalf of guest VMs. On a Xen host, privileged server VMs perform I/O on behalf of client VMs. The configuration for calculating which server VM services requests for which client VMs is stored in Xenstore, as key/value pairs.

The following diagram shows a Xen host with a single client and server VM, with a single virtual device in operation. Disk blocks and network packets flow via shared memory between Xen-aware drivers in the VMs, shown in the lower-half. The control-plane, shown in the upper-half, contains the metadata about the datapath: how the device should appear in the client VM; where the I/O should go in the server VM; where the shared memory control structures are etc. 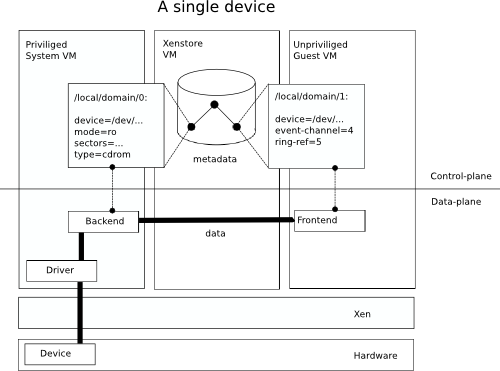 The Xenstore device attach protocol insists that all device keys are added through atomic transactions, i.e. partial updates are never visible to clients and transactions cannot interfere with each other. A Xenstore server must abort transactions whose operations were not successfully isolated from other transactions. After an abort, the client is expected to retry. Each key=value write is communicated to the server as a single request/response, so transactions comprising multiple writes are open for multiple round-trip times. This protocol is baked into guest VM kernels (including Linux, FreeBSD, Mirage, ...) and won't change anytime soon.

Xenstore is used heavily when lots of VMs are starting in parallel. Each VM typically has several devices, each of these devices is added in a parallel transaction and therefore many transactions are open at once. If the server aborts too many of these transactions, causing the clients to retry, the system will make little progress and may appear to live-lock. The challenge for a Xenstore implementation is to minimise the number of aborted transactions and retries, without compromising on the isolation guarantee.

The design goals of the Irmin-based Mirage Xenstore server are:

How does Irmin help achieve these goals?

The Xenstore service is a reliable component and very rarely crashes. However, if a crash does occur, the impact is severe on currently running virtual machines. There is no protocol for a running VM to close its connection to a Xenstore and open a new one, so if Xenstore crashes then running VMs are simply left orphaned. VMs in this state are impossible to manage properly: there is no way to shut them down cleanly, to suspend/resume or migrate, or to configure any disk or network interfaces. If Xenstore crashes, the host must be rebooted shortly after.

Irmin helps make Xenstore recoverable after a crash, by providing a library that applications can use to persist and synchronise distributed data structures on disk and in memory. By using Irmin to persist all our state somewhere sensible and taking care to manage our I/O carefully, then the server process becomes stateless and can be restarted at will.

To make Xenstore use Irmin, the first task is to enumerate all the different kinds of state in the running process. This includes the obvious key-value pairs used for VM configuration as well as data currently hidden away in the OCaml heap: the addresses in memory of established communication rings, per-domain quotas, pending watch events and watch registrations etc etc. Once the state has been enumerated it must be mapped onto key-value pairs which can be stored in Irmin. Rather than using ad-hoc mappings everywhere, the Mirage Irmin server has persistent Maps, persistent Sets, persistent Queues and persistent reference cells.

Irmin applications are naturally written as functors, with the details of the persistence kept abstract. The following Irmin-inspired signature represents what Xenstore needs from Irmin:

The main 'business logic' of Xenstore can then be functorised over this signature relatively easily. All we need is to instantiate the functor using Irmin to persist the data somewhere sensible. Eventually we will need two instantiations: one which runs as a userspace application and which writes to the filesystem; and a second which will run as a native Xen kernel (known as a xenstore stub domain) and which will write to a fixed memory region (like a ramdisk). The choice of which to use is left to the system administrator. Currently most (if not all) distribution packagers choose to run Xenstore in userspace. Administrators who wish to further secure their hosts are encouraged to run the kernelspace version to isolate Xenstore from other processes (where a VM offers more isolation than a container, which offers more isolation than a chroot). Note this choice is invisible to the guest VMs.

So far in the Irmin Xenstore integration only the userspace instantiation has been implemented. One of the most significant user-visible features is that all of the operations done through Irmin can be inspected using the standard git command line tool. The runes to configure Irmin to write git format data to the filesystem are as follows:

where keys and values will be mapped into OCaml strings, and our VIEW.t is simply an Irmin DB.View.t. All that remains is to implement read, list, write, rm by

As it happens Xenstore and Irmin have similar notions of "paths" so the first mapping is easy. We currently use sexplib to map Node.contents values onto strings for Irmin.

The write function simply calls through to Irmin's update function, while the merge function calls Irmin's merge_path. If Irmin cannot merge the transaction then our merge function will return false and this will be signalled to the client, which is expected to retry the high-level operation (e.g. hotplugging or unplugging a device).

Now all that remains is to carefully adjust the I/O code so that effects (reading and writing packets along the persistent connections) are interleaved properly with persisted state changes and voilà, we now have a xenstore which can recover after a restart.

Unfortunately by the time this is done, interesting Xenstore state has usually been deleted. Unfortunately the first task of the human operator is to evaluate by-hand the logged actions in reverse to figure out what the state actually was when the problem happened. Obviously this is tedious, error-prone and not always possible since the log statements are ad-hoc and don't always include the data you need to know.

In the new Irmin-powered Xenstore the history is preserved in a git-format repository, and can be explored using your favourite git viewing tool. Each store update has a compact one-line summary, a more verbose multi-line explanation and (of course) the full state change is available on demand.

For example you can view the history in a highly-summarised form with:

The summarised form shows both individual operations as well as isolated transactions which are represented as git branches. You can then 'zoom in' and show the exact state change with commands like:

Last but not least, you can git checkout to the exact time the problem occurred and examine the state of the store.

Xenstore is part of the control-plane of a Xen system and is most heavily stressed when lots of VMs are being started in parallel. Each VM has multiple devices and each device is added in a separate transaction. These transactions remain open for multiple client-server round-trips, as each individual operation is sent to Xenstore as a separate RPC. To provide isolation, each Xenstore transaction is represented by an Irmin VIEW.t which is persisted on disk as a git branch. When starting lots of VMs in parallel, lots of branches are created and must be merged back together. If a branch cannot be merged then an abort signal is sent to the client and it must retry.

Earlier versions of Xenstore had naive transaction merging algorithms which aborted many of these transactions, causing the clients to re-issue them.This led to a live-lock where clients were constantly reissuing the same transactions again and again.

Happily Irmin's default merging strategy is much better: by default Irmin records the results of every operation and replays the operations on merge (similar to git rebase). Irmin will only generate a Conflict and signal an abort if the client would now see different results to those it has already received (imagine reading a key twice within an isolated transaction and seeing two different values). In the case of parallel VM starts, the keys are disjoint by construction so all transactions are merged trivially; clients never receive abort signals; and therefore the system makes steady, predictable progress starting the VMs.

The Irmin Xenstore is under active development but you can try it by:

Install basic development tools along with the xen headers and xenstore tools (NB you don't actually have to run Xen):

Initialise opam (if you haven't already). Make sure you have OCaml 4.01:

Clone the code and build it:

Run a server (as a regular user):

In a separate terminal, perform some operations:

Next check out the git repo generated by Irmin:

Comments and/or contributions are welcome: join the Mirage email list and say hi!